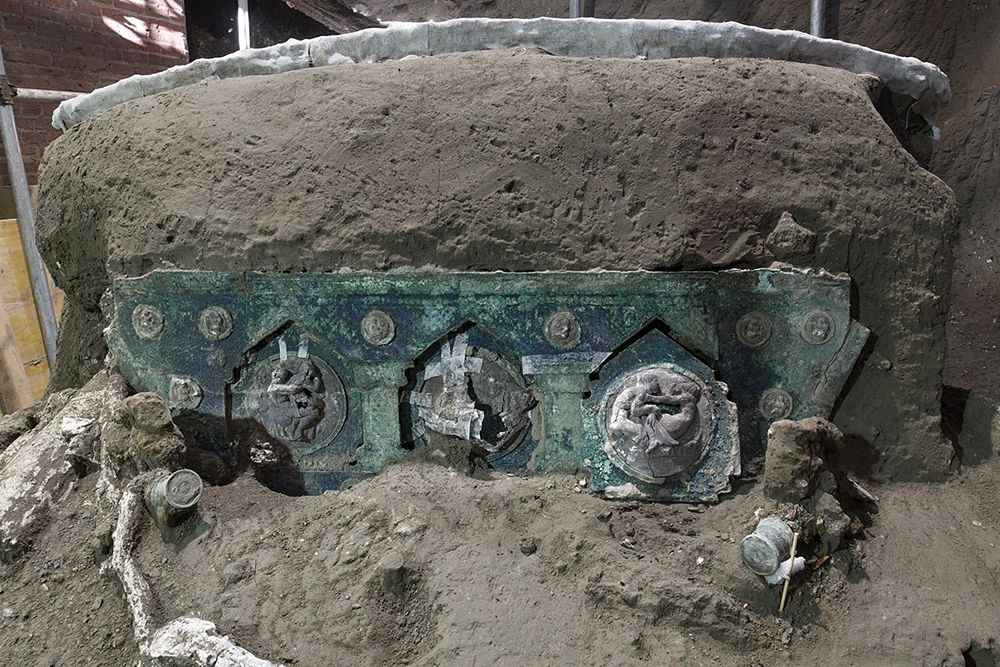 The findings in the suburban area of ancient Pompeii continue with the discovery of a large ceremonial chariot with four wheels, along with its iron components, beautiful bronze and tin decorations, mineralised wood remains and imprints of organic materials (from the ropes to the remains of floral decoration), has been discovered almost intact in the portico facing the stable where, in 2018, the remains of 3 horses, including one still in its harness, had already been found. This is an exceptional discovery, not only because it adds an additional element to the history of this dwelling and the story of the last moments in the lives of those who lived in it, as well as more generally to our understanding of the ancient world, but above all because it represents a unique find – which has no parallel in Italy thus far – in an excellent state of preservation.

“It is an extraordinary discovery for the advancement of our knowledge of the ancient world”, declared Massimo Osanna, outgoing Director of the Archaeological Park, “At Pompeii vehicles used for transport have been found in the past, such as that of the House of Menander, or the two chariots discovered at Villa Arianna (one of which can be admired at the new Stabian Antiquarium), but nothing like the Civita Giuliana chariot. What we have is a ceremonial chariot, probably the Pilentum referred to by some sources, which was employed not for everyday use or for agricultural transport, but to accompany community festivities, parades and processions. This type of chariot, which has never before emerged from Italian soil, bears comparison with finds uncovered around fifteen years ago inside a burial mound in Thrace (in northern Greece, near the Bulgarian border). One of the Thracian chariots is particularly similar to ours, even if it lacks the extraordinary figurative decorations that accompany the Pompeian find. The scenes on the medallions which embellish the rear of the chariot refer to Eros (Satyrs and nymphs), while the numerous studs feature erotes. Considering that the ancient sources allude to the use of the Piletum by priestesses and ladies, one cannot exclude the possibility that this could have been a chariot used for rituals relating to marriage, for leading the bride to her new household.” 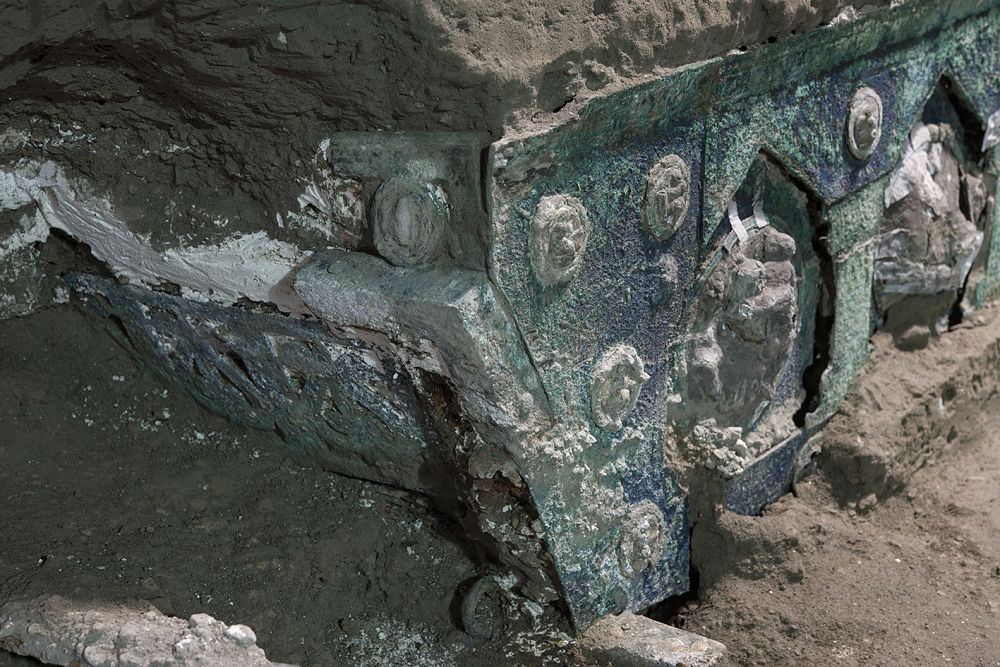 The discovery was possible as part of the collaboration between the Archaeological Park of Pompeii and the Public Prosecutor’s Office of Torre Annunziata, a joint activity started in 2017 with the subsequent Memorandum of Understanding signed in 2019, which sought to combat illegal activities which had been conducted in the area. The ongoing excavation project has a dual objective: firstly, to cooperate with the investigations of the Public Prosecutor’s Office of Torre Annunziata, in order to bring an end to the looting of cultural heritage by perpetrators who had dug several tunnels in the area in order to intercept archaeological treasures, and secondly, to reveal one of the most significant villas of the Vesuvian area and to protect it from further looting. The excavations, which have also allowed us to verify the extent of the illegal tunnels and the damage they have inflicted on cultural heritage, have been constantly accompanied by stabilisation and restoration operations on what has steadily emerged. Indeed, from the start, the excavation has been characterised by considerable technical-operational complexity, since the rooms to be studied are partially below and alongside modern dwellings, with all of the consequent structural and logistical difficulties such a situation entails. 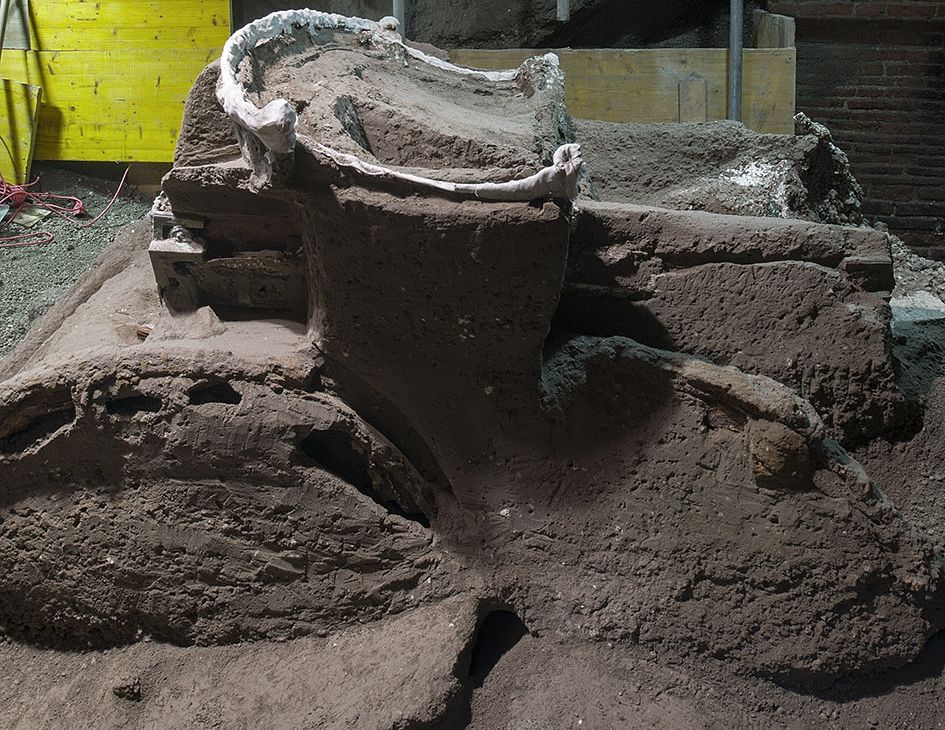 THE EXCAVATION IN CIVITA GIULIANA

The interventions which have been carried out over recent months have required careful planning on the part of an interdisciplinary team composed of archaeologists, architects, engineers, restorers, vulcanologists and specialised workers but also, as the excavation proceeded, archaeobotanists and anthropologists. An excavation was subsequently carried out which reached a depth of 6 metres relative to the road level, with stabilisation both of the excavation fronts and the robust masonry structures – which were preserved up to a level of 4 metres – that emerged over the course of the investigations. From the very beginning, the excavation of the room where the chariot was found revealed its exceptional nature: the area in question is in fact a double-level portico which opens onto an uncovered courtyard, and which features the carbonised wooden ceiling with its network of beams, preserved in its entirety. 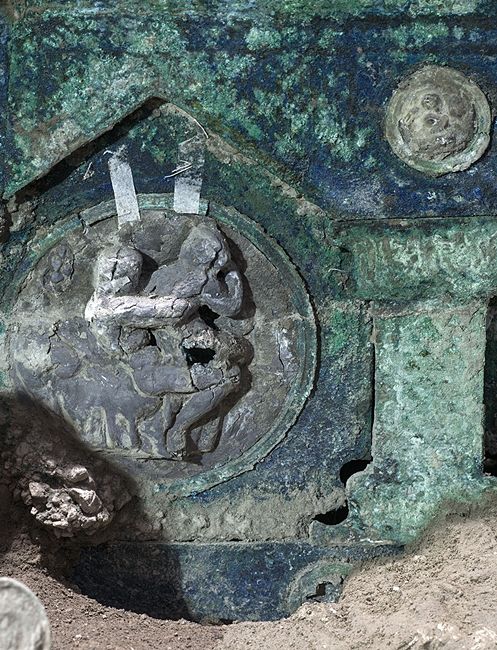 One of the decorative medallions – Ph. © Luigi Spina

In keeping with the interdisciplinary perspective consistently adopted in the excavations of the Archaeological Park of Pompeii, archaeobotanical analyses have been carried out on the wood, which have shown that the ceiling was constructed of deciduous oak wood (Quercus sp. – cf. robur – English oak), a timber which was frequently used in the Roman age for structural elements. The carbonised wooden structure of the door on the southern side of the room, which connected the portico to the stable where the three equids were recently discovered, was also preserved, and upon analysis was identified as beechwood. The wooden ceiling was carefully consolidated, cleaned, and removed from the excavation area in order to permit the investigations to continue. 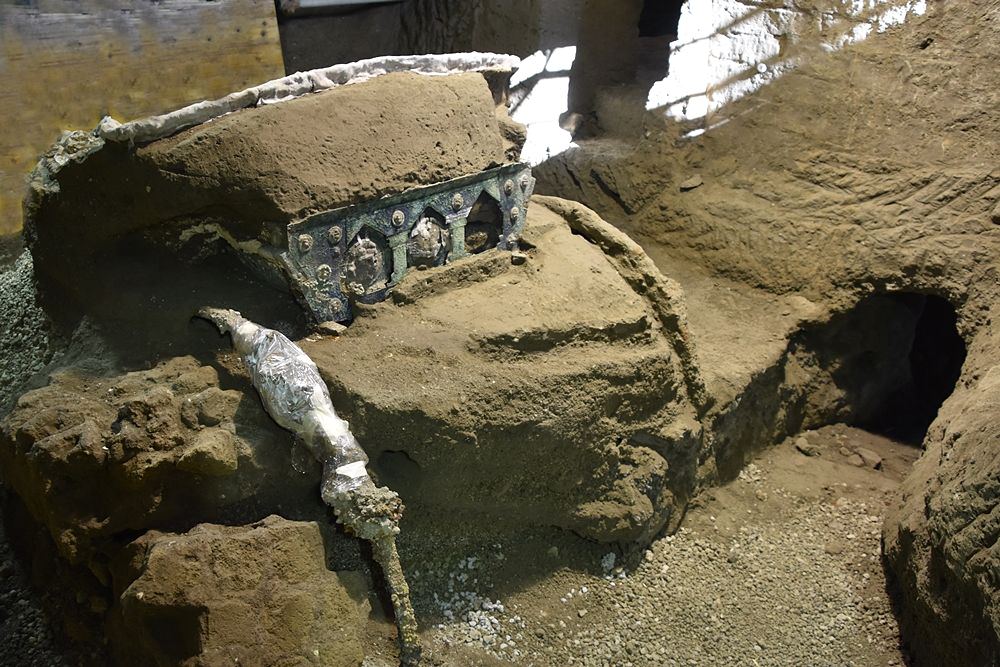 On January 7th an iron artefact, the shape of which suggested the presence of a significant buried artefact, emerged from the covering of volcanic material which had flooded into the portico, just below the removed wooden ceiling. The excavation, which proceeded slowly over the following weeks due to the fragility of the elements which were progressively emerging, unearthed a ceremonial chariot, which had miraculously been spared by both the collapse of the walls and ceiling of the room and by the illegal activities, with tunnels passing it by on two sides, but without compromising the structure.

Atop high iron wheels, connected by an advanced mechanical system, rests the light carriage (0.90 x 1.40 m), or the main part of the chariot, where the seat was located, surrounded by metal arm and backrests, for either one or two individuals. The carriage is richly decorated along both sides with alternating engraved bronze sheet and red and black painted wooden panels, whilst at the rear there is a complex and extensive decorative system featuring three distinct registers with a succession of bronze and tin medallions with figurative scenes. These medallions, set in bronze sheet and surrounded by decorative motifs, represent male and female figures in relief, depicted in erotic scenes. The bronze sheet is also decorated in its upper section with small medallions, also in tin, which depict cupids engaged in various activities. In the lower section of the chariot there is a small female herm in bronze with a crown. 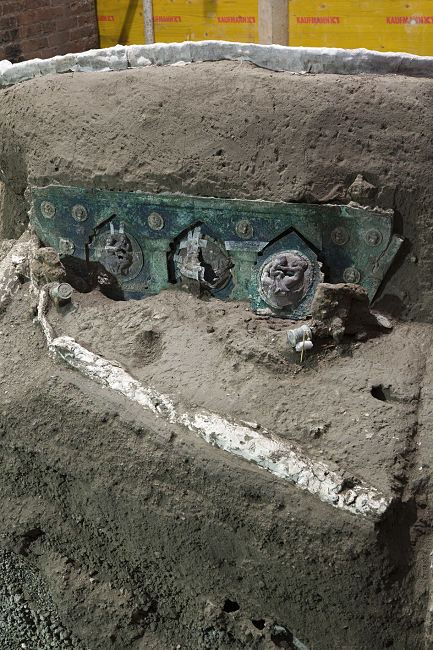 Archaeobotanical analyses were also conducted in this instance, which showed that the wood used to create the side structures and rear of the chariot, to which the bronze decorative elements were fixed with small nails and clamps, was beech, which is particularly suitable for this kind of production.

From the moment it was identified, the excavation of the chariot has proved to be particularly complex due to the fragility of the materials involved and the difficult working conditions; as a result, it was necessary to proceed by means of a micro-excavation conducted by the restorers of the Park, who are specialised in the treatment of wood and metals. At the same time, whenever a void was discovered, plaster was poured in as part of an attempt to preserve the imprint of the organic material that was no longer present. Consequently, it has been possible to preserve the shaft and platform of the chariot, as well as the imprints of ropes, thus revealing the chariot in all of its complexity. 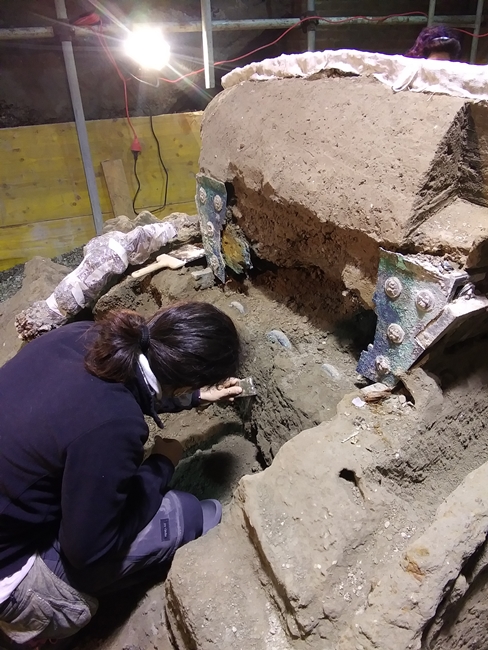 Given the extreme fragility of the chariot and the risk of possible illegal operations and damage caused by news leaks, the team has worked every weekend since mid-January, both to guarantee its conservation but also to send a strong signal of the Park’s action to protect the heritage, alongside the Public Prosecutor’s Office of Torre Annunziata and officers of the Naples Carabinieri Headquarters for the Protection of Cultural Heritage, assisted by investigators of the Carabinieri Group Command of Torre Annunziata. This collaboration also led to the participation of Park technicians in the ongoing trial of the alleged illegal excavators, who have struck this villa severely in recent years.

With the in situ micro-excavation completed, the various elements of the chariot have been transported to the laboratory of the Archaeological Park of Pompeii, where the restorers are working to complete the removal of volcanic material which still engulfs certain metal elements, and to begin the lengthy restoration and reconstruction of the chariot. What has emerged has been systematically recorded via careful photographic documentation and through laser scanner surveying. 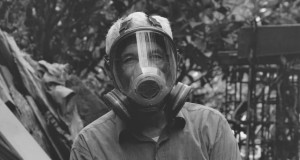