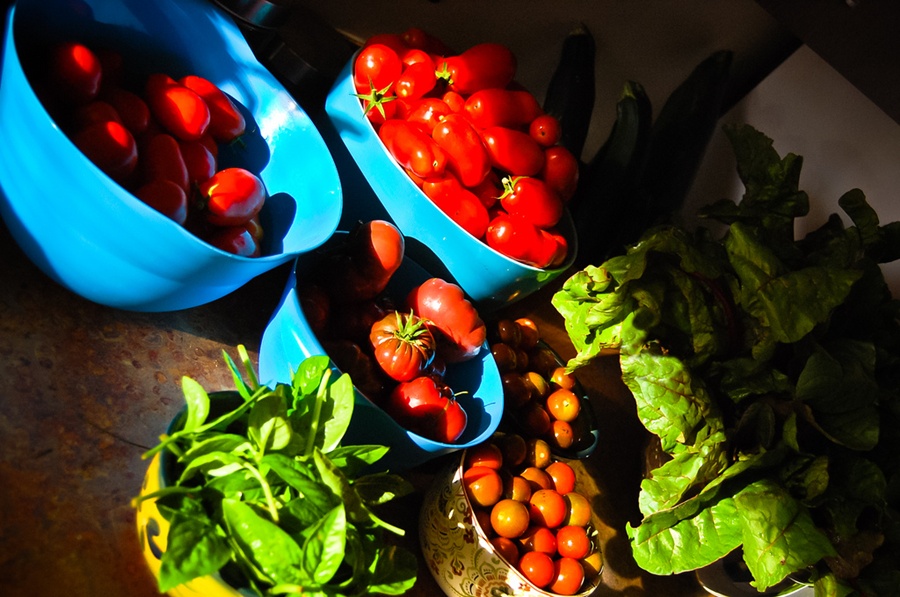 I’m tired. But I continue to look at the moon. Enchanted.
Maybe I should not do it, it’s not my role, it is no more my role.
But this day, dedicated to the preparation of “SALSA”, the classic “tomato passata”, was unforgettable.

This 2015 Summer, so hot and without any drop of rain, reminds me of the sunburned and thirsty Puglia of my childhood, before it was discovered that our region is so rich with underground water. The red soil is so dry. And suddently in my memories it appears the time when we prepared salsa in the late ‘50s. 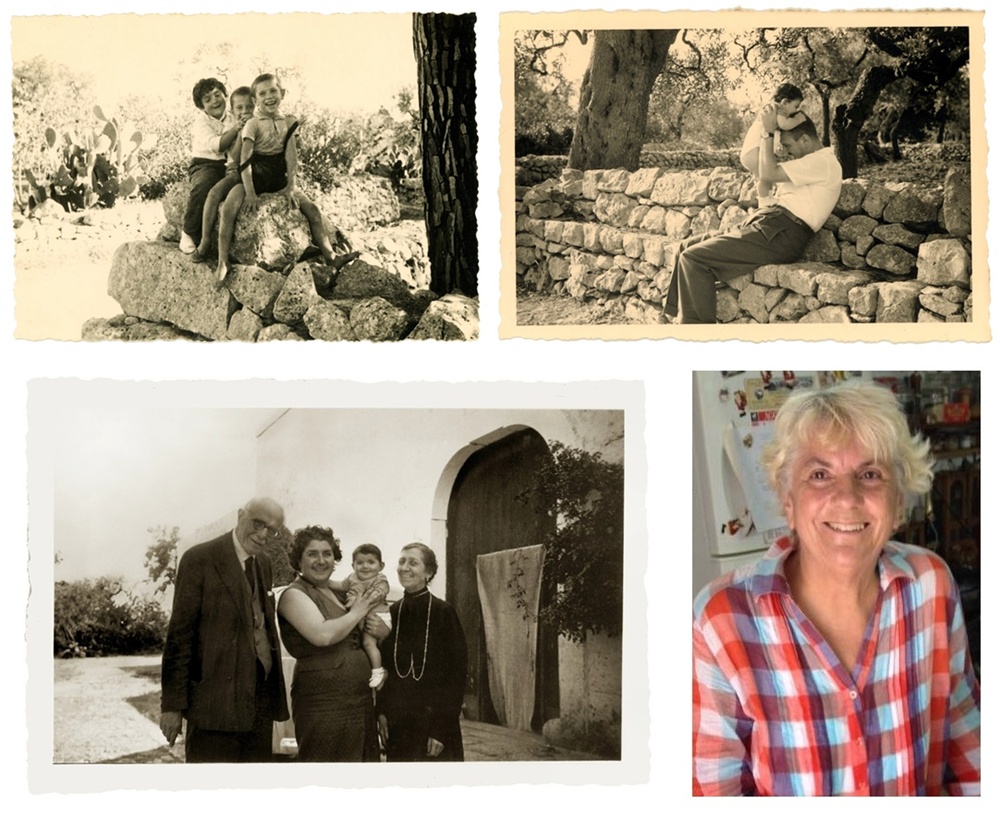 From the top: in our farmhouse in Mola di Bari … Me, with two little friends … then with dad…and in my mother’s arms, between the two grandparents. Today…

Nowadays this Puglia tradition has become lost, because also here in every supermarket you can find platforms of “tomato passata” offered for cheap price. Anyone is invited to cast away this authentic tradition and “home made salsa” is going to be thrown into oblivion.
But not me. I do not accept the invitation. No thanks.

Sheltered by the shadow of the majestic olive trees, those with a masseria behind, those in the open air, just with a “palummidd”, that is a little well for water supply, each family in Puglia prepared its own salsa. 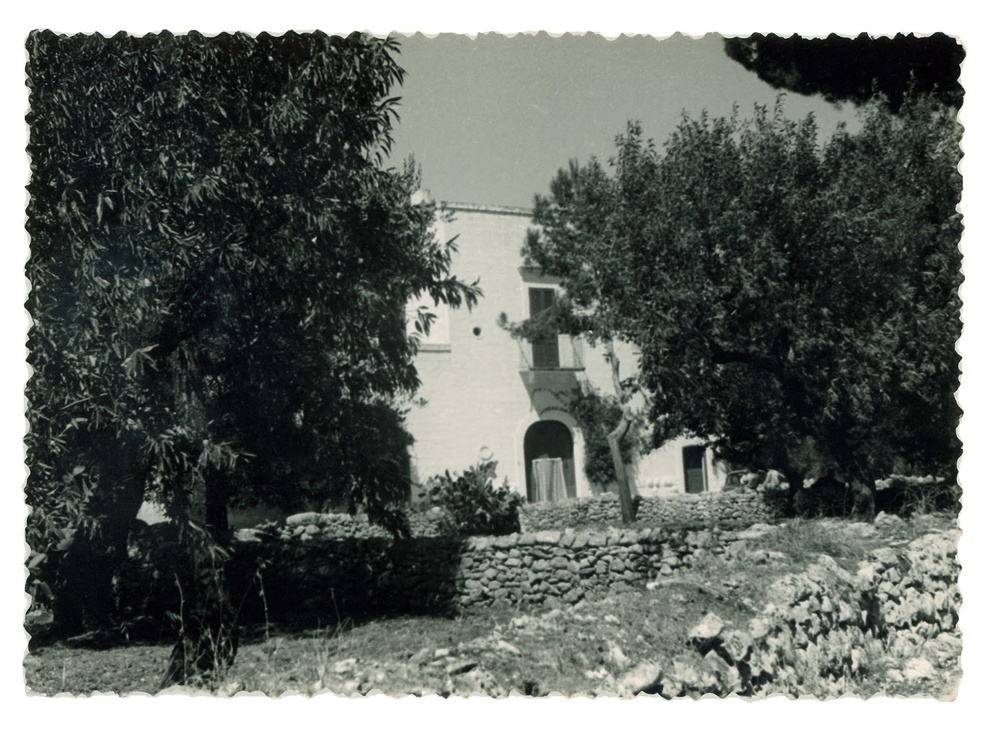 A vintage glimpse of our masseria Serra dell’Isola, in the countryside of Mola di Bari … setting of many homemade tomato sauces…

From the far past, LA FAMIGLIA, the patriarchal family was the pivot, around which scanning the natural and slow rhythms of life style, related to agriculture and breeding.

As well organized bees all the members of the family play their roles to prepare this winter supply, with rudimentary tools and with ingenuity and cooperation of all. The preparation of the sauce was a symbol of family solidarity, the patriarchal family, enlarged, made of uncles, cousins, grandparents, grandchildren, sons-in-law, daughters, each including in its role as a rudimentary orchestra , with a mysterious and tested gear. Just perfect. The day of the sauce was expected and feared at one time, because all the energy had to be concentrated for the success of the company…And the sauce had gone to be prepared for each of the “actors”, for each household.

But why am I speaking in the past tense?

I have to use the present tense.
Because today, in spite of what worse is happening and in spite of the echoes of tv news, financial crisis, public debts, unemployment, pensions, if you had been here, in Masseria Serra dell’Isola, you could get away from the anguish of the future and perceive everything even without knowing a word of Italian.

This year, the sun and the heat and contingencies have led us to postpone the date. As expected, the general comment is: “Never after Ferragosto”, the middle of August. If you fail the time, it starts to rain and the tomatoes are not longer good. What do we do?
Even we in the supermarket? It is not possible…

Give me the permission to call everyone with it’s own name. This year Isabella, Vittoria’s daughter, and her husband Michele, with their little boy Donato, are going on holiday to Perugia. Uncle Giovanni must work in his vineyards, the grandfather Vito (as he says 59, but he is over 95) cannot be left alone, Gabriele, he is on holiday in Croatia, Marco broke his wrist, etc. etc. etc….

But my guardian angel, this incredible war machine who take care of me and of the masseria, a war machine, who is unable to hurt a fly, a war machine armed only with an unshakeable confidence and of a wonderful smile that never ceases to amaze me, this solar and wonderful woman called VITTORIA, issued the ruling: Tuesday we are going to organize the family for SALSA.

So yesterday Francesco brought us his excellent tomatoes, freshly picked, arriving with his marvelous car , an old Ape “treruote”, overloaded, that every curve tilted dangerously and I saw him almost fall over on the climb of hill. 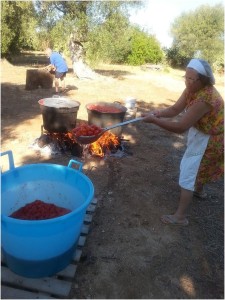 And this morning miraculously all answered the call. Isabella and Michele have delayed the departure to Perugia and their little Donato did not stop a moment, splashed with water since they began to wash the tomatoes until bottling and then running with the empty wheelbarrow on which the crates had been transported up to the bins for the final boiling.

Pinuccio was still on vacation and kindly collaborated, in spite of been joyfully killed by mosquitoes until the last minutes. Gabriel come back from Croatia and smiling sacrificed himself willingly.Maria convinced grandfather Vito, returned from an operation to the femur, that a picnic was just what it would take to make him better.Marino and Marco, inseparable, they knew where to find and to do everything at the right time:how to wash the bottles, where to take the screwdriver, find the bins, mount the platforms, to find the point where there would be a shadow, and in the meanwhile looking for a big umbrella, so that Aunt Maria is kept from being burned under the sunshine, let Isabella, as a lizard, under the same sunshine, while filling the bottles. Michele operated the drill that stretched on a machine with manual system speeds up the whole, and then bent to close the bottles.

And Vittoria was there, where everything is difficult: next to the fire to control the cooking of tomatoes, to drain the tomatoes, to dose the salt.

And the young old grandfather Vito oversaw everything, happy to be once again among the leaders. 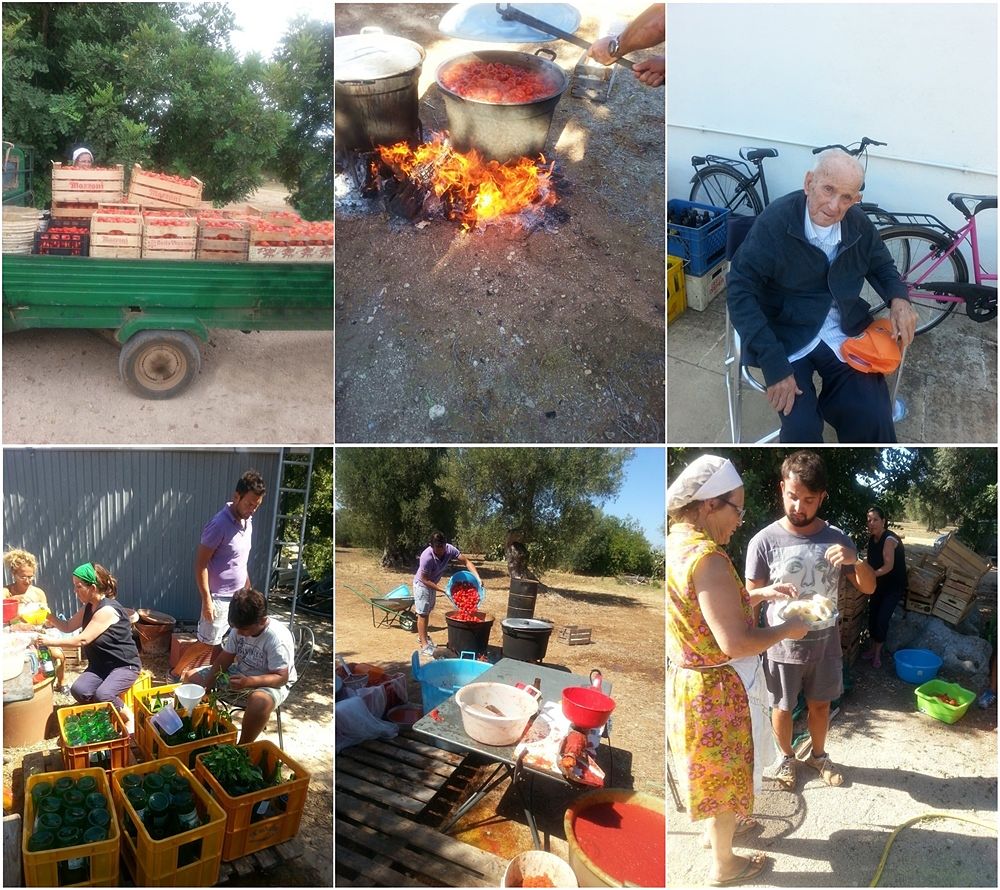 Everything seemed to be over and then the lunch break had to be the finish line waiting for the arrival of Uncle Giovanni, the master in stowing bottles in the bins, the man who is able to save any bottle without breaking anyone. But after a secret meeting Maria and Victoria have decided it was too little sauce and then ran Francesco is set in motion and for one managed to get another ton of tomatoes.

And so the carousel is started again, after the “adagio” of the short, not fast lunch, everyone around the table, all tired, all still able to smile. 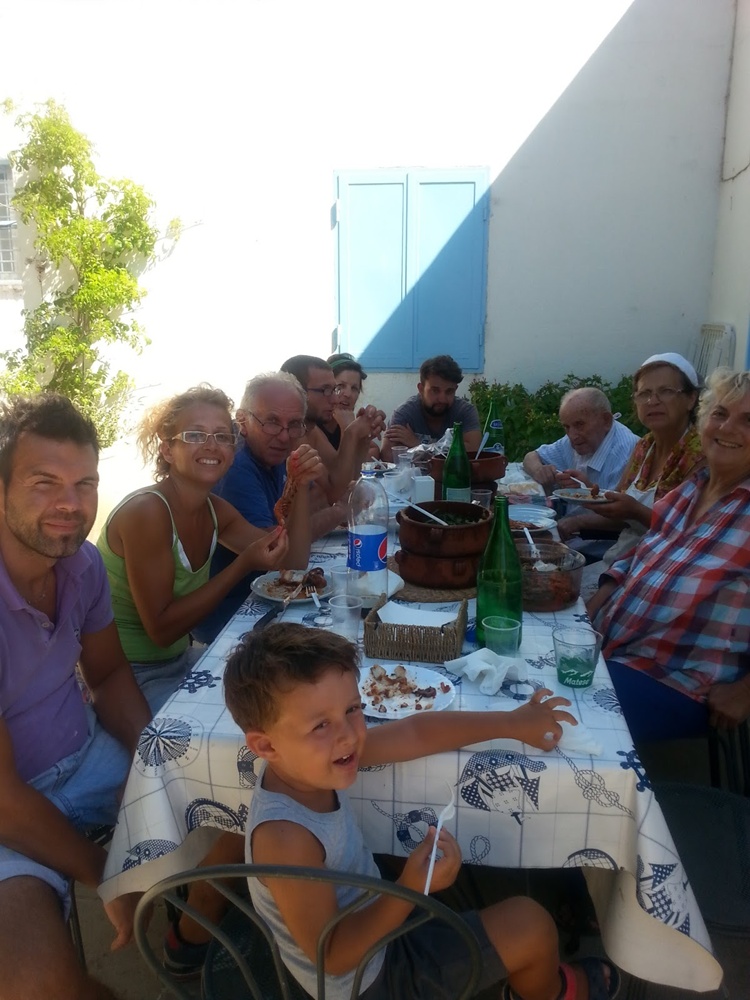 The well-deserved lunch break with the entire working group…

Late afternoon Uncle Giovanni, back from their fields, so tired but as kind and pleasant as usual, proceeded to stow bottles in the bins. 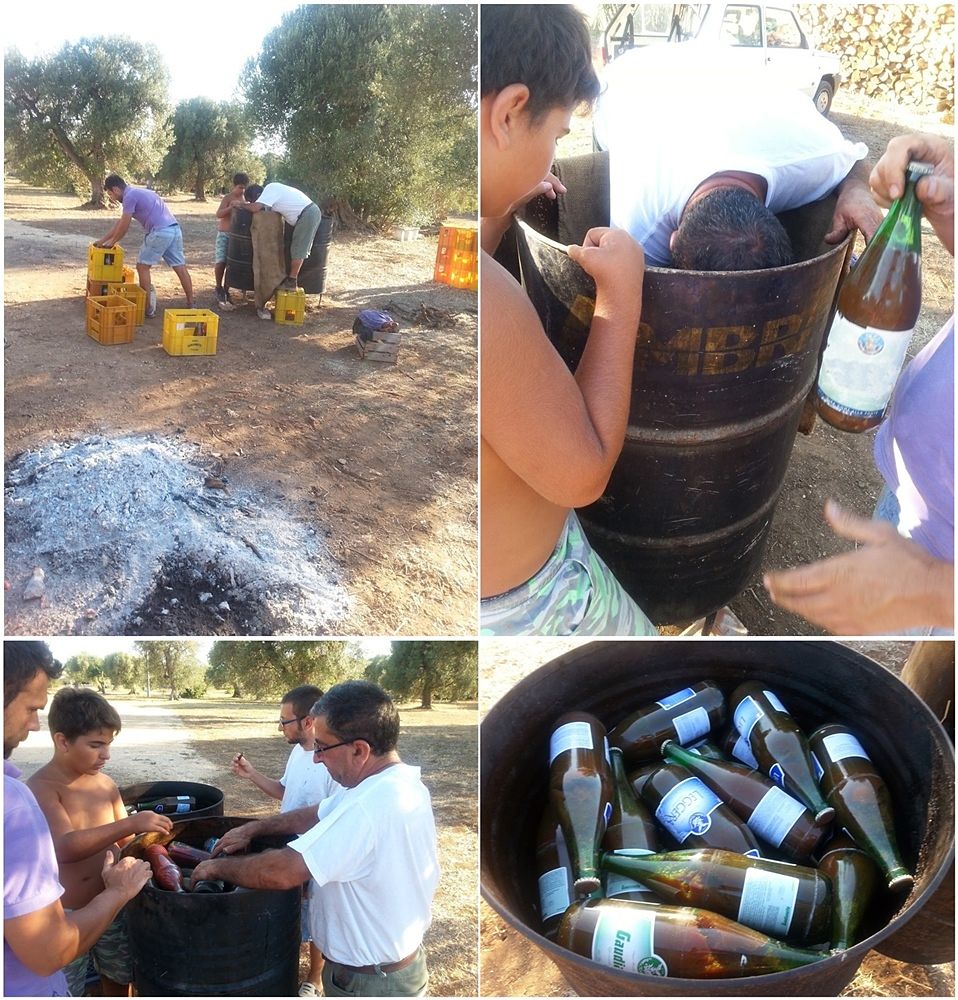 And as usual on summer evenings, the sun has burned the sunset. And then it went to fade away as the fire, in the twilight.

Thank you, thanks to everyone. 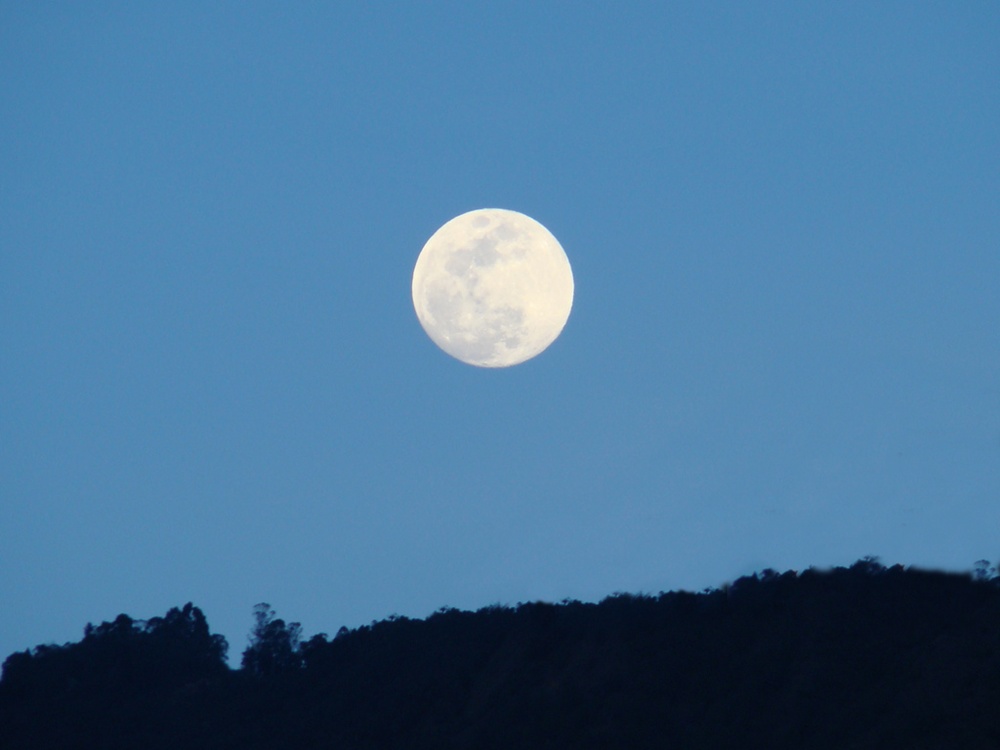 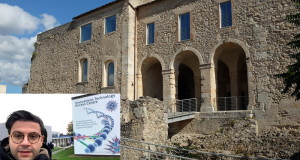 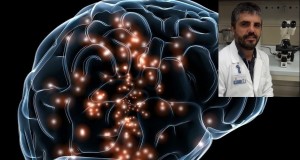 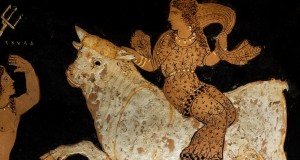