An Exceptional Discovery. Breathtaking Calabria of the Romano-Carratelli Code 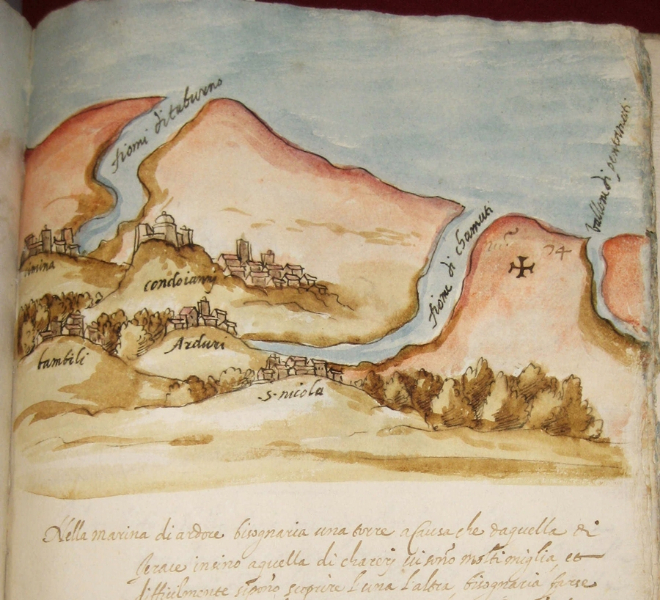 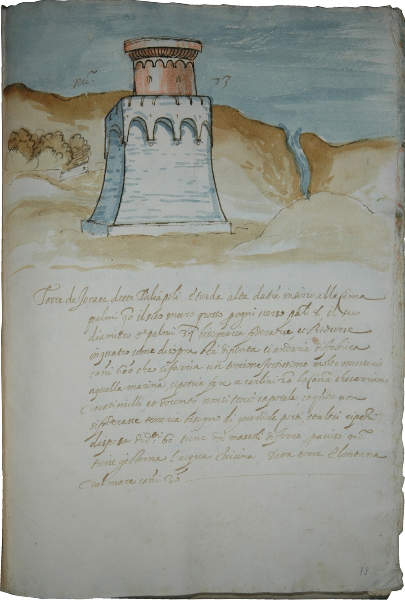 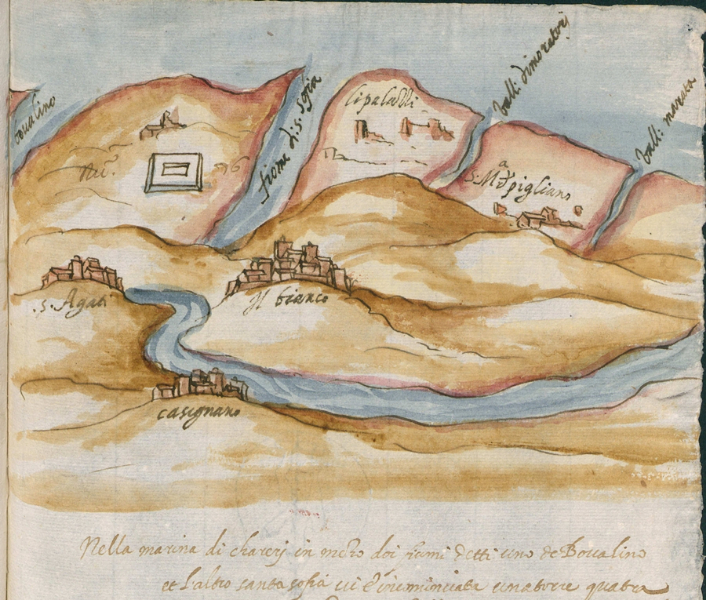 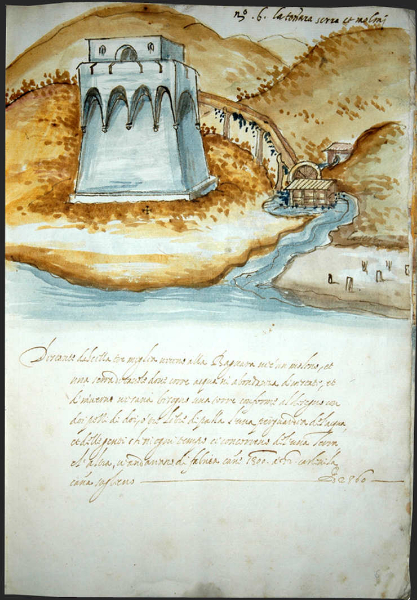 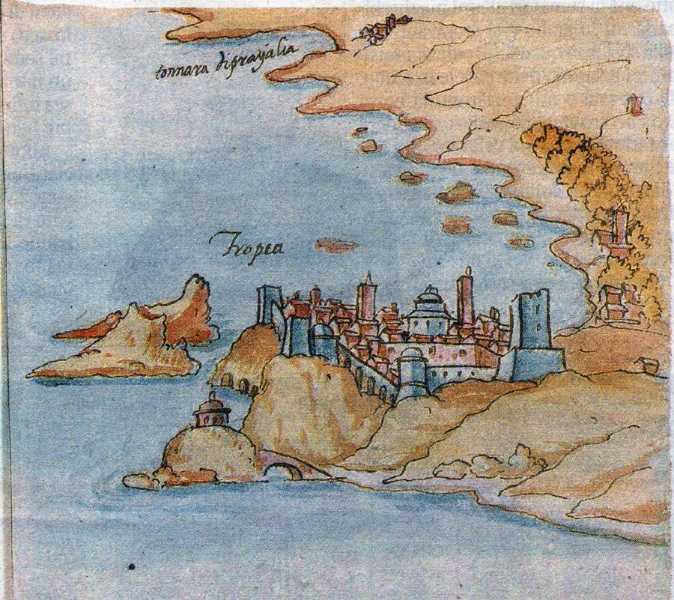 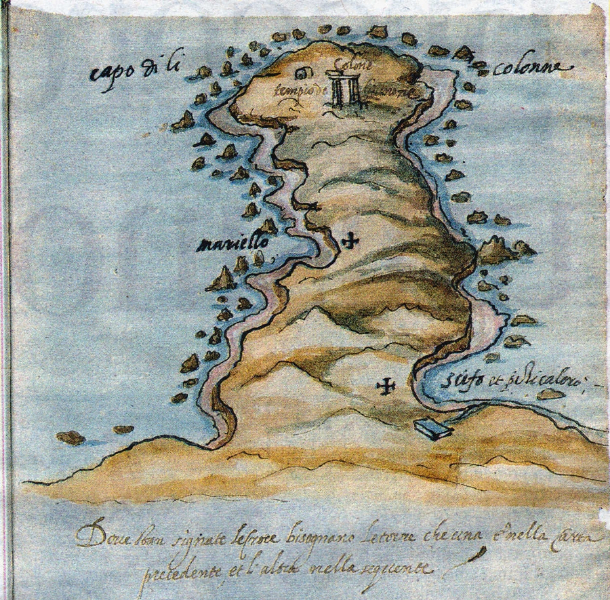 It was five years ago now while I was netsurfing on the look out for information about the coastal towers of Calabria to complete my book on the Pagliapoli tower (today although a ruin, one of the most ancient coastal towers of southern Italy) that I came across a page which literally made me jump out of my seat. An antiques dealer was selling a volume containing around a hundred drawings of coastal towers in Calabria Ultra. The sketchy details included an approximate dating to the seventeenth century and a photograph of one of the pages of the manuscript. This was what really made me start with surprise – it showed an excellent watercolour of a part of the coastline from my area of the region, which I obviously knew well, together with a short caption in which the unknown writer stated that the cross on the drawing indicated the site of a defence tower, already hit by numerous pirate raids. I really cannot overstate the beauty of the picture (photograph 1) and the great interest the manuscript held for me .

After a hasty series of phone calls I managed to contact the auctioneers and through my friend Simonetta Conti, lecturer in geography at the Second University of Naples and great expert in ancient cartography, was able to speak to the official expert at the auctioneers, also a colleague and good friend of Prof. Conti’s , and asked him to intervene with the unknown buyer so that I might be allowed to see the precious manuscript.

I was relieved to receive a positive reply to my request and was getting ready to board a plane to anywhere in the world to meet the new owner of the manuscript. Much to my delight I was told that he was Calabrian, from the city of Vibo Valentia! I’m not a great traveller and so, overjoyed for the coincidence, was lucky enough to meet an extraordinary person – the refined and cultured Domenico Romano Carratelli (in the past he would have been called a patron of the arts). His boundless passion for ancient books led to the foundation of the Accademia dei Bibliofili in Vibo Valentia first and then to the purchase of this precious manuscript, together with many other volumes – some of inestimable value – which make up his remarkable library.

Turning the ninety-nine pages of the manuscript was exciting enough in itself but even more enthralling was the discovery of an enormous quantity of unpublished and sometimes unexpected information which was going to make researchers reconsider radically some historical hypotheses, mistakenly thought to be widely consolidated. The manuscript, which is unfortunately anonymous and undated, is not just a sterile list drawn up by a generic visitor for purely statistical ends. Instead it is, without doubt, the work of an engineer or architect, an expert in military architecture sent to report back on a defence system considered so highly strategic as to impose top secrecy on the finished report itself.

So, besides being the most reliable and accurate list of military buildings carried out at that time available today, it also gives valuable information concerning the size and state of the towers, armaments, tower keepers etc. of every single tower in the province of Calabria Ultra from the area of Crotone going around the coast of Calabria as far as the modern city of Lamezia Terme. By way of an example we can take the page dedicated to the tower at Pagliapoli (photograph 2). The report states that it was 90 palms high (c. 24 metres) and equipped with two “mascoli”, terrifying small canons which could shoot a quantity of little objects as well as produce an extremely loud bang used as a distance warning effect. The report says that the tower requires strengthening with a thick brick wall which would seem more suitable to withstanding a full-blown military attack. The tower at Pagliapoli was already standing at the time of the Viceroy Defence System having been erected as a watchtower two hundred years earlier. Thus the report is not merely a picture of existing buildings but a real ground plan for future fortifications with an expenses estimate included.

However, the manuscript does not only contain drawings of the towers. There are also some incredible panoramic views of important military bases ( Reggio, Crotone, Tropea, Bagnara etc.) or parts of the territory which still need to be strategically defended according to the anonymous reporter, with the building of further towers. Here it is worth examining another example. Photograph 3 shows a drawing of the mid-Ionian Reggio coastline between Bovalino and Bianco. There is an indication of the place where it would be desirable to build a defence tower. In the sketchy drawing the ruins of the now famous “Villa di Casignana” are clearly visible. These ruins, later buried and excavated only recently, contain splendid mosaics which have since gained worldwide renown. Another watercolour shows the two columns remaining of the ancient temple at Capo Colonna – today only one survives.

As I have already said, unfortunately nothing is known about the date of production or of the identity of the author of the manuscript. However, the research carried out by Dr Teresa Saeli has limited the dating of the work to the short timeline between 1596 and 1600 although the author remains unknown. While for a similar volume concerning the coastal defences of Sicily it has been possible to establish authorship with absolute certainty (cf. “La Sicilia di Tiburzio Spannocchi”, C.Polto, 2001), for our manuscript the author is uncertain, there having been a great number of engineers and architects sent to visit the coastal defences at that time including names of great prestige such as Mario Cartaro. Author of a famous atlas of the twelve provinces of the kingdom (taken from the work of Nicolantonio Stigliola, of which a manuscript copy dating to 1595 is known cf. V.Valerio, 1993), Cartaro stated in a letter to the Count of Lemos in 1611: “[…] I travelled to various parts of the kingdom […] especially in the year 1600 [..] in the company of D.Francesco Mindozza Serbellon to see the fortresses, castles and towers, having been ordered to make drawings and report on them, as I have done.” (V.Valerio, 1993, p.50)

Returning to my visit to the offices of lawyer Romano Carratelli (he said that I was the first researcher to see the manuscript), having finished looking through the volume, I asked my host if he would, by any chance, allow me to use the picture of the Pagliapoli tower to complete my research with the information contained in it. I was pleasantly surprised that my request was granted immediately and the precious watercolour has been included in my book “Sentinella perduta”. Of course there was still one small problem. How was I to attribute the picture in the bibliography, dealing as I was with an anonymous text ? Thus I had the idea, and the honour, to christen the text “Romano-Carratelli Code”. With this title the precious manuscript has started to circulate on the web and under the same name has recently been presented at the latest Salone del Libro (Book Fair) in Turin where it has gained much deserved attention and success.

FdS – Courtesy of G. F. Macrì
Thanks to mr. Domenico Romano Carratelli, lawyer and bibliophile, for permission to use images 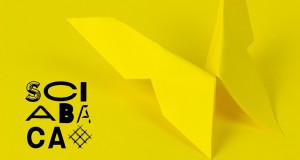 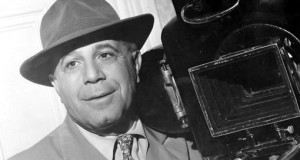